In the northwest corner of Spain, a small city is almost cultish in its importance among devout Christians and off-the-radar by almost everyone else. Or that was my expectation, which might have been valid two decades ago, before the veil (or robe) of infallibility was pierced by the wink-wink, nudge-nudge carnal benefits afforded the long-suffering clergy and put on display beside the questionably immaculate conception. Just how endemic and fundamental has the hypocrisy been?

Well, never mind all of that, because people still make the blistering hajj over several routes, not so much to cleanse their souls (or even to callous their soles), but to enjoy a cold beer over octopus and fries and have a few comradic (🎶you say “comedic,” I say “comradic”) laughs without the danger of getting a Pamplonic (🎶you say “Platonic,” I say “Pamplonic”) steer horn up your butt. (The “running of the bull” does not refer just to my blog posts.)

A massive cathedral dominates the central square, where once the faithful dragged bruised knees across the last 100 yards of reverence. Today, skateboarders dodge selfie-sticks and street performers in a devotion of life far more sincere than a cluster of dour nuns ever had. Santiago is today more a celebration of living than when bemoaning the apocryphal climb of a cross-burdened, long dead martyr.

The church is late Romanesque, barely predating gothic Notre Dame of Paris. The arches are round, not pointed, and the walls carry the weight of the high nave, without the refinement of gothic flying buttresses, allowing few window holes of stained-glass. Still, it impresses.

Because of restoration work, there was no Sunday mass for us (I hear you chuckle), but one common feature of mass is the swinging of a 60 pound, silver, incense burner traveling in a wide arc over the congregation, propelled along its flight by a priest holding one end of the pendulum rope, assisted by some kind of pulley at the apex. The rope was dangling from the pulley to inspire our imagination, briefly, before we wandered down the street for bread and wine, produced in Biblical profusion for the carefree multitudes, sans wedding celebration. 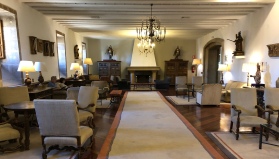 From the bed, note the feet

View of the courtyard 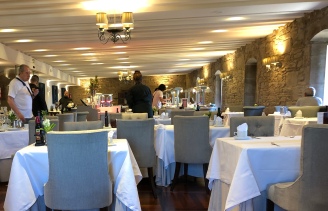 Our hotel (accommodations rarely make for interesting blog fodder) is worthy of mention, being nearly as old as the church and standing deservingly on one side of the giant plaza beside the cathedral. The hotel was originally a hospital. It has hundreds of rooms. The internal rooms edge four large cloistered courtyards, peaceful as stone, until trod by a new guest with a roller and the oblivious nerve to stray from the thickly carpeted halls within the building. The wheels of dragged luggage sounded like rain on tiled roofs from our large bedroom chamber. A few decades ago, giving a room with a single bed in such a holy site to two men would have been sacrilege, but the Spanish have had it up to the sombrero with authority and today, tourist dollars speak louder than Latin mass. Clink clink. Thank god.

Though I would not want our Portuguese friends to be offended, the food in Spain is superior to that in Portugal. One item above, the wedge of Tarta de Santiago, is a particular dessert made only here and though it looks simple, it is perfect. 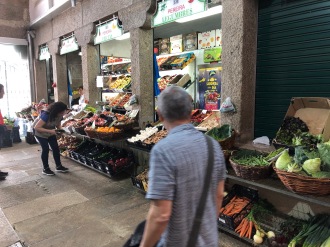 The huge food market was closing

Each vendor has a gimmick

The color of the fresh produce 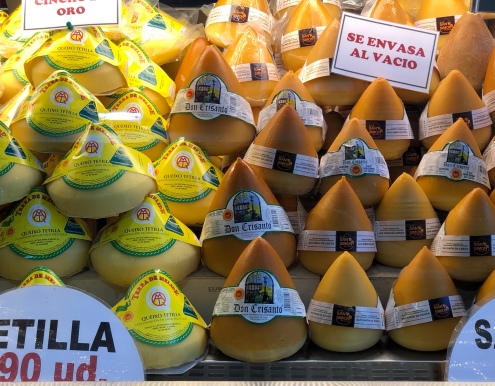 Cheese made from breast milk, I think

In one part of the city is a food market, like Boston’s Quincy Market but four times larger. There were fewer prepared food options, but there were some with people drinking wine and eating fresh seafood, midday. (I advise visits in the morning in lieu of breakfast…I mean, for breakfast.)

These random shots of the city give, I hope, a sense of the charm of Santiago. Most of the old town is car-free. Pilgrims wander the narrow streets enjoying the calm pace of life here. We spent three nights, which is probably more than most do, but the accommodations were comfy and there always seemed to be a new neighborhood to haunt.

The morning breakfast table, overlooking a quiet plaza. We miss this.

One response to “Santiago de Compostela”