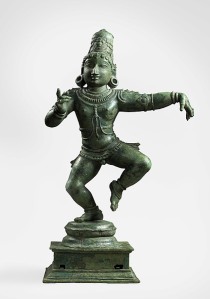 Creating a web page without identifying oneself is both confusing and stupid. I have been slow to learn this, but this paragraph should help. I have decided to try writing a blog about a trip though Belgium, Germany, Austria, and into Hungary. Those entries are under “Travel Blog” above. Additional entries for Southern France were made difficult to complete due to problems back home.

There are many conflicting stories about Sambandar (alternately “Sambandhar,” and others). I am not their referee. I was drawn to the story, briefly told at the Asian Art Museum in San Francisco, in which the 16 year old, perpetually naked “poet” begged the god Shiva to release him from his pending marriage, which Shiva granted. I thought it a precursor to the west’s Peter Pan myth and so was drawn to the character as vindication of my unshakeable hedonism.

The statue at the Asian is slightly different (better I think) from this one, but it is encased with other items, making it difficult to get a clean photo. Nevertheless, my pen wilts at the thought that anyone might think I am an advocate of Hinduism or any other ism. It is the dance of life that drew me to this character and nothing more.