From the start, Syracuse had promise, convenient parking, a hotel along the water front, a room on the 3rd floor (our 4th in the US, as we object to a floor zero) with a balcony, all in a smartly renovated grand building, and warm, sunny weather. 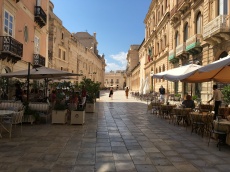 Some streets are broad 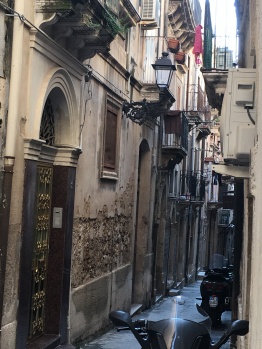 Some buildings are colorful

Stephanie had a restaurant recommendation, giving her a mission. We three old men hustled along behind, sheepishly oohing and ahhing at the wrought iron terrace rails, elegant cornices, heavy wooden doors with big knockers, narrow alleys that curve out of tantalizing sight, while she who must be obeyed, map in hand, head high in watch for helpful street signs, led us to one of the most outstanding restaurants in Sicily. We were wise to have followed. (But we would have done so if stupid, too.)

Rod ordered shrimp with tomatoes, while I made the superior choice of fava bean cream with fried salted cod. The shrimp were too lightly cooked for his liking, so we swapped dishes, ¼ eaten. I gesticulated like an Italian (the only thing I can do like an Italian) to make some now-forgotten, cogent observation, cleanly knocking an expensive glass of Sicilian white across the absorbent table cloth. The staff were quick to blot the spill with fine table linen. I ordered a replacement bottle, assuring a long lunch.

The Rogers had a tasting menu of various small dishes. My attention was too preoccupied to record each dish, but I can explain the photos. (ehh, maybe not) 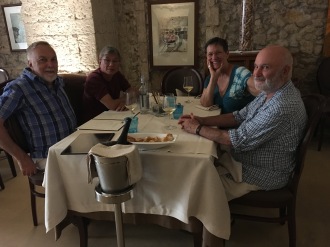 Tuna with marmalade of peppers

It was a leisurely lunch. Last to leave, we probably cut into the staff’s siesta or other plans, so an invitation to return remains unexpected. The most expensive meal on our trip, it looked like lots of pizza over the next week…one could do worse. We didn’t.

The Mediterranean tradition of sleeping off one’s lunch alcohol worked well for Rod and me—well, me. Rick and Stephanie explored more of the city; Rick demonstrating a humiliating resistance to early retirement.

In the evening, we found the streets buzzing with excitement. This was the Saturday night before the start of school’s fall session. Half the crowd was under 25—the better looking half.

Italian youth rarely raise their voices when gathered. It seems like respect for elders, but I doubt that they even see us—we move like trees—but they do not draw attention to themselves among their friends. Americans pride ourselves on individualism and find lots to appreciate in that, putting celebrity and wealth above family and friends. Europeans value community, which gives them healthcare, free college, and gun control. We have Facebook and Donald Trump; they have slim bodies and stylish clothes. Tough choice. 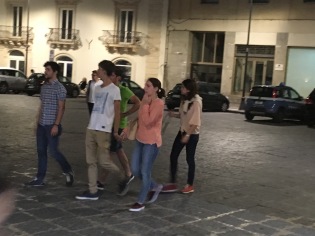 Teens in a plaza

While seated at a table

and a little distracted.

A couple of young lads, perhaps 12 or 14, were briskly walking up a broad, pedestrian street when one spotted a couple of friends his age. He pulled his companion over to greet them, kissed each friend lightly on both cheeks, introduce his friend, who shook hands. That seemed so foreign to me, but perhaps it is harder to punch or to shoot someone you have just kissed. That has always been that case for me.

We met an artist with an exhibit at a huge gallery (old, empty church). We were his last admirers of the day, but he spent time with us explaining his work while pacifying his infant son. Rick and Stephanie bought a stunning canvas from him. I took a photo of an engaging Greek subject, as is my wont—want?

He works in layers