The hotel at Agrigento was modern. We enjoyed a bottle of prosecco on a patio watching the sunset and had a late-night sandwich before bed. Even luxury hotels seem bland in comparison to the old palaces with modern plumbing  procrustean-fitted into odd spaces we have been enjoying. Our luggage loaded, we fled to a local Greek ruin.

Will we leave this much?

Sometime after the turn of the 21st century, Icarus fell to earth near a temple to someone who never existed and whose name I have forgotten. Curiously, his wings and torso were kept intact, much appreciated by the giggling tourists who stood bravely by his immodesty. (What’s to be modest about?)

The drive into Enna was by far our most challenging on Sicily. The GPS led us up a steep narrow path to a car that was kindly blocking the road, which I mean sincerely. The tapering street was going nowhere, so the careless parking saved us perhaps another 50 meters of descent in reverse. The correct route, not much wider, we would have abandoned except for an occasional sign on the way reading “Bristol Hotel.” Options were few, so the signs served mostly as reassurance. Stephanie rescued us by actually asking in Italian for directions (I was so manly embarrassed). A women offered to lead us in her car to the hotel, grabbing for herself the last, legal parking space. See! So much for seeking help.

We parked in a handicapped spot, which we had earned by this time, and a handsome, dark Italian youth (they are everywhere!) ran out of the hotel to assure us that he would move the car as soon as another spot was free. The turns to the hotel were so tight that some were 2-point turns for our experienced guide. Confident no tow truck could get into Enna, much less punish our parking sin, we checked in.

Man with a big bell

View from our balcony

Though I could not understand a word he said, the hotel clerk, who gave generous Italian directions to Stephanie, has a musical diction of rolled ‘r‘s and canolli-crisp ‘t‘s that had me enthrall, as if listening to a budding tenor. Perhaps it was not the public school system that taught respect for his language, but the lesson, whatever the source, he had taken with pride. Oh, that we could imbue such musicality and rhythm into American conversation.

His directions pointed us to a restaurant first approached from the rear. A waiter spotted starving tourists (perhaps alerted by our hotel guy) and marched us through the kitchen and dinning room to an outdoor table protected from the mountain sun by wide awnings. What a lunch it was. 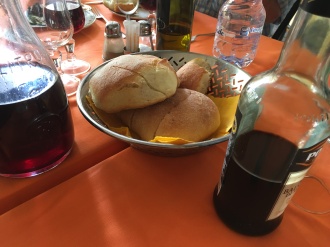 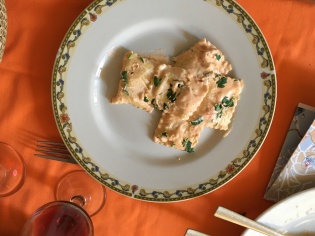 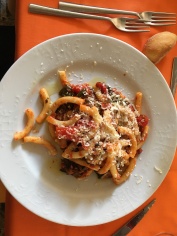 After lunch we hiked to the east end of the city, where a castle once protected the citizens from roving mobs of foreign knights. One character, photo below, looks like a member of the KKK. The castle was open for anyone to wander at no charge and no oversight. Lean over the parapets at your own risk.

Rod at the village edge

A view from Toledo, or so it looks

The land below the castle

Enna makes few compromises to modernity, but at night kids clustered in cheerful groups below our balcony chatting, the faces of their smart phones flashing like fireflies in the murky chill of the night. They are nice kids. Never yelling, but the stone surfaces around the plaza amplify their friendships. My sleepless night wondered what it would be like to be among them. If only I could speak Italian.

The square outside our hotel

The people of Enna have access to new cars (few are SUVs), cell phones, computers, 220V current, and all modern appliances. The town may look worn, but beneath the surface, people are healthy and well dressed, interiors are renovated. They are middle class—comfortable.

The center photo shows the single inlet to the hotel’s square. It is 2-way, though you may wonder how a single car squeezes in. They manage. Someone is first, a car in the opposite direction backs down. There are no rules, but it seems as efficient as it can be.

Does respect for the past result in respect for the present? I grew up in a city where many fine buildings were razed to accommodate a cheap shopping mall and ugly parking lots. The people of Enna live with 500-year-old, mostly unadorned buildings that people like us flock to. Do cities that revere the past build carefully today?

Some Italians build with the expectation that future generations will live with their decisions, but the devastation of an earthquake in the Italian mountains three weeks ago where over 300 people were killed by shabby construction, including a modern school that collapsed, thankfully empty, in the night, is a testament to corruption and greed from the Greeks to the present. Can we knit the past to the future? Or is that just for old wine?

One response to “Agrigento to Enna”