Italy is filled with cities and towns that have built imposing monuments to the glory and grace of God. Naples is no different except that it appears to have paid for the meal before it was served, as the mosaic at the top of this post depicts (in my imagination). The response from the ill-fed residents is to ignore traffic laws (if there are any), to take what is not theirs from tourists, and to party ferociously into the wee hours. The following video is an example of how hard they have tried to get on the big guy’s good side (Pompey showed, He does not have one):

Stephanie Rogers alerted us to a chapel (no pews) to see some extraordinary sculpture at Cappella Sansevero. This remarkable museum is at the corner of nothing and nowhere. The unadorned exterior is easier to miss than the ticket office with the virtual sign, “Stand here if you do not know how to queue.” 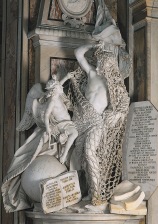 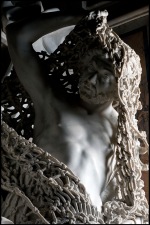 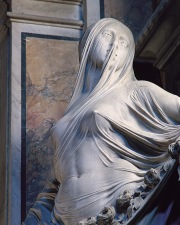 Wife, who died young, of founder 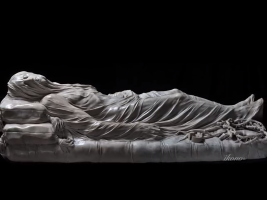 The body of Christ under a shroud

The builder was a Freemason, so all the artwork is filled with symbolism. For instance, a torn book at the veiled mother’s feet symbolizes “a life interrupted.” I had wrongly guessed “an unruly child.” The ability to make stone transparent is amazing. Why not make the walls of cathedrals with this technique to save on staining glass?

In the creepy crypt below stands two bodies with skin and muscle removed to expose an elaborate circulatory system, with eyeballs. The blood vessels, we are told, are so accurate that many have speculated some eerie technique of injection, but that has, thankfully, been discounted.

We next moved on to the archeological museum, filled with really cool stuff from Pompey, a city that shows how much fun life was before being interrupted by Christian modesty and a mountain’s fart. These people were unabashed devotees of sex, with some outstanding variations on an old theme. 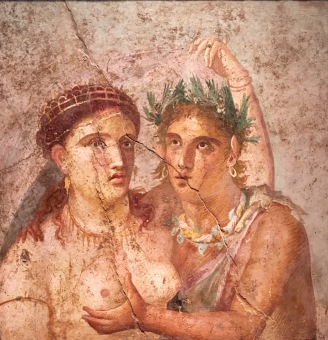 First base before baseball

He doth not protest too much

‘Cause a chicken’s only good for consumé 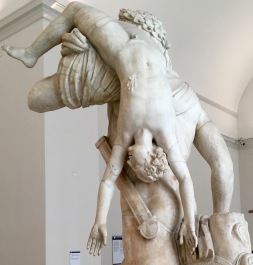 The case for circumcision 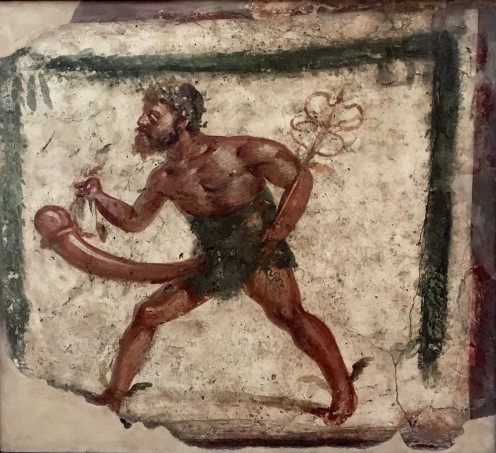 But Pompey wasn’t just about sex. There was plenty of mayhem.

Darius about to get his ass kicked 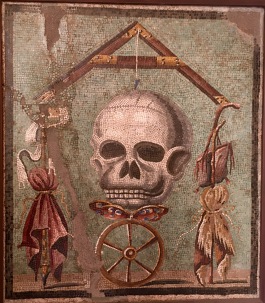 The mosaics were outstandingly preserved beneath many feet of volcanic ash. Soon we shall visit the city of Pompey, as it has been gradually uncovered.

One hears questionable claims of marauding bands of pickpockets (don’t rest on my luck), but the threat from vehicular chaos is harder to exaggerate. I found an article on the web that had me laughing until my dinner was cold. Because web pages are unreliably maintained, I have borrowed the text:

Italians are known as “crazy” drivers, and Naples is infamous for having the “worst” drivers in Italy!  However, this is because they simply follow different rules than Americans.  Or, more precisely, they only follow one rule:

The First (And Only) Rule of Italian Driving: Do not hit anything that is in front of you.

Corollaries to the First Rule of Italian Driving:

I had an embarrassing moment right after the museum when I dropped into a small men’s shop to find a couple of shirts that were exactly what I wanted—cheap. In fact the original price was about six times the “sale” mark, which I guess is called pre-bargaining?

As I considered whether to try a medium or large, the amply bosomed seller snatched the garments from my hands before I could test the sticking strength and handed me an XL! Perfect fit. Very trim. You guys do this on pasta and pizza? Madonna!