Rod and I get to know a city or town by walking the streets frequented by residents, for they are the people who love a place for its soul and not its trinkets. If a traveler were to find a city more beloved of its inhabitants than Dublin and Edinburgh, he would be wise to end his travels then and there. We spoke with cab drivers, bartenders (m/f), waiters (m/f), and other drinkers and none had anything but a broad smile for their city. These plaques are among many on a citizen’s wall of the parliament building. 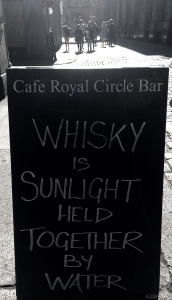 Of course one can always depend on a street poet to add something pithy to the staid pronouncements of the past. This one, “Whiskey is Sunlight held together by Water,” gives the pedestrian a clear sense of the people’s priorities.

One striking difference between Dublin and Edinburgh is the seriousness with which they handle their drinking laws. No one gets carded in Dublin, but it is as common in Edinburgh as in San Francisco or Oklahoma City [no compliment intended]. At last call, the police in Edinburgh swoop down on the nearly countless pubs from beneath their invisibility cloaks and drag off a drunk kid or two (presumably American, but who knows) unwilling to abandon an unfinished drink they will not quickly dispatch. In Dublin, you can drink outside the bars and the drinking age is a kindly advisory from the friendly folks at city hall.

Both cities have some exceptional street musicians. As one Dublin cabby told me, “If you can’t sing, then you become a comedian.”

I filmed an a cappella group who I thought better than The Manhattan Transfer (a low bar), but my recording equipment, which I carry in my back pocket without a protective case, fails to do justice to them (or my reader[s]).

We who descend from empires are used to the honoring [sic] military men and politicians. The two largest statues in Edinburgh revere Adam Smith and David Hume, an economist and a philosopher.

The protective patina is worn from Hume’s exposed big right toe by college students eager to nail a test in the humanities. (That’s two, Dan and Tony.)

The public transportation system of both Dublin and Edinburgh are above ground, extensive, clean, remarkably quiet, and each has free wifi. They all have lots of glass, but before you hop onto one of these, take the three-week course on how the system works so as to learn how many zones you are about to travel. We took a double-decker bus from the airport and it was quite comfy.

The traffic signals have some minor differences with SF. First, the yellow caution is brief—it really means stop. Before a light changes from red to green, it first displays red&yellow together, to alert drivers to put the car into gear or, for those cars that turn off at stoplights, to let drivers take their foot off the brake in order for the engine to start in time for green. The pedestrian countdown clocks in Dublin give the number of seconds one has to wait at the curb before getting a walk signal. Ours are a threat; theirs, a promise.

Both cities have managed to keep the crosswalks free of the mangled corpses of American visitors who stand in the gutters while waiting for a walk signal (in my dreams). Bus drivers turn the corner at intersections at barely diminished speeds, polishing the sidewall of their tires with smoothed curbstones. There’s not much leeway for the daffy tourist unaware of speeding vehicles coming from the right. buh bye

One feels that almost half of Edinburgh is public green space. The high hill in the background of the photo below on the left is Holyrood Park, attached to one of the Queen’s 10,000 homes and open to the public when she’s absent. The green space in the center of that photo is largely an ancient cemetery, serving some purpose for the living people in the apartments that surround it. On the right side photo, there’s a long, wide (we see across the width) park that divides Old Town from New Town.

This view of the distant Holyrood Park is introduced by another park, The Royal Terrace Gardens. Between the two, in a hidden-from-view valley, are a Palace, the Scottish Parliament, and several city blocks.

The photo at the top of this page shows the independent George Heriot’s School, called “independent” where we would say “private.” The more confusing term “public school” is a left-over from a time when most schools catered to students by religious denomination and public schools admitted anyone with a 98.6 and money. (Today, because of the EU, the temperature requirement has been lowered to precisely 37.)

Edinburgh has modern buildings, too. They even have a large Apple store. I did not take many photos of new buildings, but I did notice that even simple apartment blocks have some nice refinements. This food court obscures the conduit, ducts, and pipes that run under the open ceiling with a series of white wafers that are remarkable simple and dramatic. There are many examples of this sort of attention to space.

This view from New Town looking toward the castle in Old Town shows a mix of Georgian and modern, but where modern buildings have been inserted, they fit. 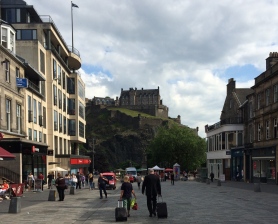 Where the rail tracks divide the city, old from new, modern office buildings take advantage of the open space. Notice the high bridge that crosses the rail station from New Town to a high hill in Old Town. It connects street-level to street-level.

Another, strained example of open space is the plaza in front of our hotel where much younger people enjoy a collection of pubs and sports bars with fish and chips. My favorite shop on the square (where Rod bought a solar powered waving queen—don’t ask) is called “The Mutt’s Nuts,” which is a more visually accessible, if a less welcome, alternative to our expression, “the bee’s knees.” Whether a bee has knees, I have never seen, but the mutt… .

And what more appropriate place to insert Dirty Dick’s than after the Mutt’s Nuts.